More
BRING BACK THE WAR COMIC! 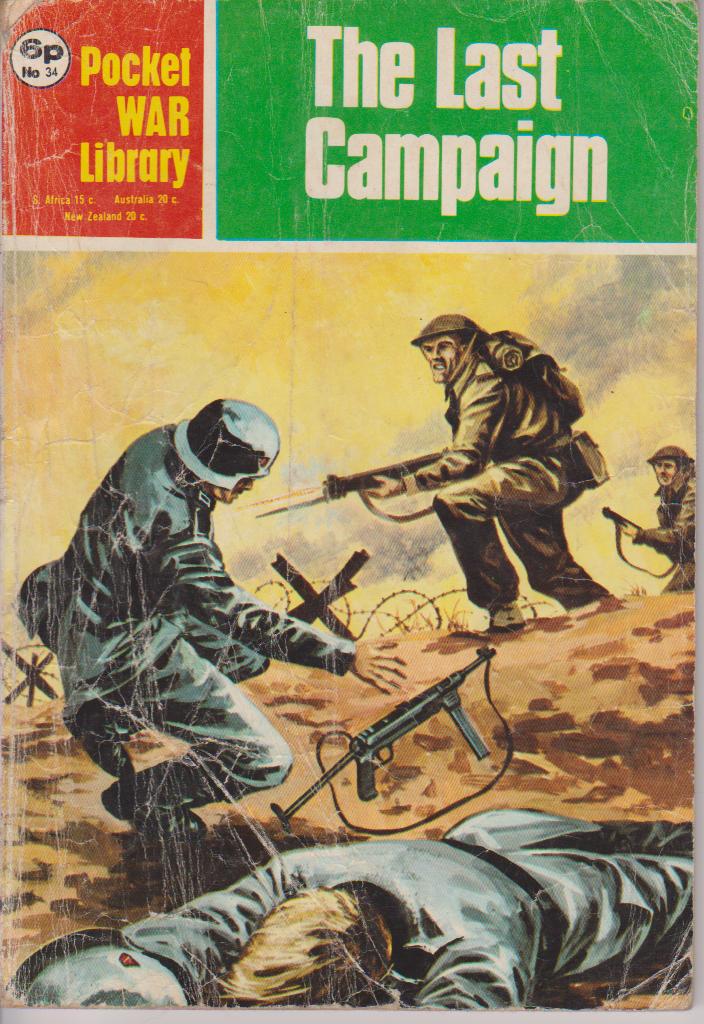 In the sixties and much of the seventies World War Two was still in the New Zealand publics consciousness. Most households had memories of the war or a relation that served in one of the theatres.

This was also a time when a slug-gun, gap-gun was what boys got for Christmas, not a potential danger, nor a mind-alerting product of ‘fascist warmongers.’

New Zealand independence from ‘mother England’ and the televised coverage of the barbarity of real-war courtesy of Vietnam didn’t start making inroads into popular psyche until the end of the seventies.

Kiwi girls blissfully pushed toy prams without the slightest idea they were pawns of a misogynistic system, carefree boys climbed trees unaware of the threat to health and safety.

Kiwi boys also read their fill of blood and gore in ‘War Comics.’

Perhaps as encouragement to its readership most publishers incorporated ‘Library’ somewhere in their title.

At one stage Combat Picture Library was even printed in New Zealand for local consumption (approx 1960) such was the demand.

Gordon and Gotch imported and marketed all the fore-mentioned British War Comics. Their monopoly on both sides of the Tasman lead local publishers to re-print overseas comics not available to Australasian consumers.

One of those publishers to re-print overseas war comics here in New Zealand did so under the banner ‘Leisure War Libraries’ starting in the mid to late sixties out of New Plymouth. I know there were at least 43 issues of ‘Leisure War Libraries’ published here (more info appreciated) In-fact Leisure Associates also produced Westerns under the banner 'Leisure Western Libraries' and cops & robbers comics as 'Leisure Detective Libraries' around the same period. Oh so frustratingly Leisure Associates never bothered to date any of their comics.

Australia also had it's own war comics for sale over here. The likes of Authentic War Stories, All in Pictures, Air Action Library/Air Battle Library etc. These comics added more of an American slant to the genre being re-prints of U.S publications.

If you thought for a second the N.Z or Australian produced comic would give the content a more commonwealth flavour by including a few Kiwi’s and Aussie's in the storyline you’d be sorely disappointed. There were only token appearances of ANZAC soldiers even in the NZ/Aust produced comics. In the annals of comic history it was Ol' Blimey that won WW2 almost single-handedly. Remind me was Russia even involved?

By modern standards the contents of a standard war comic are tame.

There were never any limbs being blown-off, blood splattering or primeval brutality children are exposed to today.

All too ironically war-comics became politically incorrect, un-cool and were instead replaced in N.Z lounges by graphic videos, mindless cartoons and life-sapping video games.

In a society which is now languishing with ‘underachieving boys’ there is a root cause and easy solution at our finger-tips.

Rather than our boys being handed-out ghastly novels like the God People to read & study as part of NCEA, they should instead they be given a choice of Commando or Battle Picture Weekly.

Battle Picture Weekly produced 637 issues and War Picture Library a massive 2013 so the potential for the N.Z Education Department to develop some sort of syllabus based totally around War Comics is self-apparent.

Random questions from a future Level Two English Exam could look like this:

“Analyse one or more characters in the comic D-Day Dawson”

“Contrast the relationship of the leading character Jim ‘The Sarg’ Wilson in the comic ‘Sergeant without Stripes’ with that of his troops under his command.”

$1,000 says most Kiwi boys would recall the contents of any war comic ahead of drivel like ‘Owls do Cry’ or ‘Wuthering Heights’ (makes yawning motions)

The comics themselves were a study in stereotypes and clichés but never the less harmless.

Another nett benefit of War Comics on the edification of young-men in our society is the grand opportunity for them to learn a second language.

Let’s make New Zealand the tourist Mecca for Germans with whole swathes of the Kiwi population, namely males, fluent in their native tongue .

German Tourist: “Could you please give me directions to the Museum?”  N.Z Local: "Gott in Himmell, mach schnell”

No rote-learning or tapes to listen to in the car necessary – all thanks to the wonders of War Comics.

Let’s make them compulsory reading for all boys.

We may need to beef them-up for a modern generation with cartoons depicting gratuitous violence but that apart the great news is Commando Comics are still going!

There is still hope for the world, a daring rescue plan is a foot.

For anyone who is interested Commando has a special re-issue hardback on sale entitled ‘Anzacs at War.’ Double Day also recently re-released selected War Picture Library issues in a massive 10 per comic format. Mein Gott!

Footnote: I’ve managed to doctor a few pages, tongue in check style in my gallery. That’s also where you can make comments, re-live your misspent childhood English pig-dog. There's a heap of old N.Z Printed Comics by Leisure Associates - I'd love to get more info on them.