More
ON THE MAT

I know you want to

For eight memorable years (1975-83) the Television New Zealand produced programme ‘On The Mat’ was a Kiwi institution. Shot with a live audience in Auckland, then Christchurch and even Hamilton ‘On The Mat’ was a staple diet in most peoples lounges.

Canterbury Court and Civic Theatre were both local venues where the show was shot to a live-audience. Tickets were given away and sort-after items. If you were lucky enough to be in the crowd you got to see the equivalent fights for two episodes of the show - thus know the results and drama ahead of the rest of New Zealand. The Civic Theatre was a long-time Christchurch venue for pro-wrestling with Kiwi legends like Lofty Blomfield wrestling there in the 40’s.

‘On The Mats’ wrestlers became household names up and down the country.

It was promptly thereafter Kiwi mothers began complaining to schools about their sons clothing coming-home damaged as a result of boys replicating the moves & not to forget the odd broken bone or two!

Wrestling was suddenly 'in' and the talk of both the tea and jug drinking sets.

Indeed a couple of years back I was on a fishing trip with two other middle-aged guys and the subject of On The Mat arose, as trivia like this does tend to on boys trips. Over that weekend we came-up with a list of 13 wrestlers from the show, with a little help from similarly matured guys in the pub where we were staying.

The show had a huge impact and was an undoubted ratings winner.

Yet, ‘On The Mat’ wasn’t the first pro-wrestling programme to be airing on Television New Zealand, a couple of years earlier an Australian version called ‘Big Time Wrestling’ came-on our screens. Many of the wrestlers on this show later appeared in the home-grown version, the brain-child of wrestler/promoter Steve Rickard who was an affiliate of the global franchise National Wrestling Alliance (NWA)

Steve’s earlier proposals to the state-operated Television New Zealand in the early 70’s were basically stone-walled and it wasn’t until TV2 (South Pacific Television) established itself his dream for a local pro-wrestling programme took fruition.

In some ways it would be wrong to dub ‘On The Mat’ as a local show, in-fact it had a loyal audience in Pacific basin countries like Singapore, Malaysia, Japan, Guam etc and even as far away as Zaire, Kenya and Tanzania! The series (first year 14 episodes) was produced by Graham Veitch, who is indeed the father of Tony. ‘On The Mat’ has the lofty distinction as the first N.Z produced series to be sold overseas. 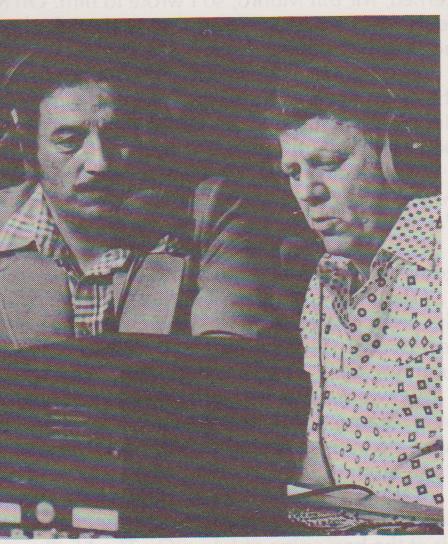 At Steve’s side on the commentary desk, the Robin of the team, was Ernie Leonard. Steve and Ernie had previously promoted & commentated pro-wrestling in the North Island. Barry Holland also ‘cut his teeth’ co-commentating with Rickards when Leonard moved to start producing. The pompous Max Cryer of all people was a ring announcer at one point.

I can still hear the booming voice of King Curtis pointing his finger at the camera and beginning his tirade with the immortal “Steve Rick….ard….Ernie Leon….ard!”

Curtis’s bulging-eyes, Abdullah The Butchers maniac stare – live on in the minds of a whole generation of Kiwi’s.

Nothing beats a ‘good versus evil’ plot.

Thanks to the wonders of the internet and the hording skills of TVNZ archivists some of the old shows are available to look at here.

In the end the show ended because the N.Z Dollar weakened and it became too expensive to bring the big-name wrestlers to our shores. Another reason for its demise was the weakening of the NWA stable versus the increasingly dominant WWF.

In my photo gallery is a fairly good spread of photos of wrestlers all from the collection of Dave Cameron. google etc.

The gallery is also the place to leave comments and feedback on individual wrestlers.

Now to the hard-part of this article - drawing-up a no where near definitive list of the wrestlers to appear on the show ‘On The Mat’.

You-too can amaze your mates by remembering the names of:

Stun them some ‘On The Mat’ Trivia like this:

- Rick Martels brother was also a pro wrestler and died during a fight!

- Before they became the tag-team The Bushwackers comprising Butch ‘Brute’ Miller and Luke ‘Sweet’ Williams were known as The Sheephearders.

- King Curtis’s full name was Curtis Piehau Iakea III and for a long time he had a second home in Auckland. He died at the end of 2010 in the place he was born and lived most his life, Hawaii.  His son Rocky Iaukea became a pro-wrestler as well.

- Robert Bruce lost partial hearing in one ear when a fan threw a beer can into the side of head. Sadly Bruce passed away in 2009.

- Abdulla The Butcher is still getting in the ring at 70! It isn’t a pretty sight I assure you, he looks like a jelly fish with legs. The enthralling Abdullah the Butcher documentary is available on You Tube. He actually speaks rather eloquently on the doco rather than just starring maniacally at the camera.

- Rumours Rick Martell was Mark Lewins son were just that.

- King Curtis was once the guest speaker at N.Z Sportsman of The Year dinner.

- Mark Lewin had a persona as a good guy in N.Z but back home in the states he was known as ‘The Maniac’ or ‘Mad Mark Lewin’

- Robert Bruce played the role of a heavy in Stanley Kubrick’s film “A Clockwork Orange”.

- Loa Leota became a politician back in Samoa

- Big Bad John (real name William Goodman) a bloke who sometimes donned a German WW2 helmet died shortly after leaving N.Z back for the U.S in what was either an unsolved murder or suicide.

- Abdulla The Butcher was/is actually Canadian and has a 7th degree black belt in Tae Kwon Do. He owns two restaurants called Abdullah the Butcher's House of Ribs and Chinese Food" one in Atlanta and one in Japan.

- Peter Maivia is Dwayne ‘The Rock’ Johnsons grandfather. He died back in 85.

- Rick Martels’s nick-name was ‘The Model’

- As part of his faith Samoan Joe became a Mormon Missionary

- Professor Tanaka real name was Charles Kalani and he was from Hawaii, serving time in the U.S Army. He became a ‘bit actor’ in a whole range of action movies after retiring and if you look hard even had a part in Pee Wee Hermans Big Adventure (clue: he’s the butler) Died of a heart attack in 2000.

- Tojo Yamamoto (real name Harold Watanabe) was another Hawaiian who became a manager after he retired. He took his own life in 1992.

- All these different names, aliases are hard to follow. Take wrestler Jack Claybourne  who wrestled overseas as Eddie Morrow along with his brother Gerry shared the surname Ethifier. Confused?

There’s always a lot to be read into a persons favourite wrestler.

Mine will always be King Curtis.

Thanks to: John Mancers book ‘Steve Rickards life On The Mat’ (1979) which came-out in 1979 and is available on Trade Me. Special hat-tip to the font of all pro-wrestling knowledge in New Zealand Dave Cameron. You’re a champ Dave.

Footnote: If you are into retro pro-wrestling a great site to visit is http://www.kiwiprowrestling.co.nz/  and the best of all I stumbled upon http://www.obsessedwithwresling.com/ You can also re-visit other classic TVNZ shows here at KiwiTV.