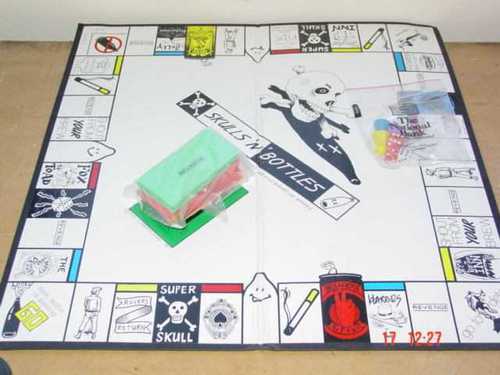 Board games have always been immensely popular in New Zealand.

Torrid battles over the Cluedo, Monopoly, Battleship, Table Soccer boards were the norm in Kiwi households until the advent of video games saw their decline in the same fashion as records, only to re-curry favour with a new generation in recent years.

Holdson, World Games all manufactured overseas games in New Zealand for a local audience, before they located China on a map.

The ‘granddaddy’ Monopoly had a N.Z version and a flagrant imitator in ‘Easy Money.’

‘Around New Zealand’ was snakes and ladders played on a backdrop of New Zealand.

So some games were of course little more than variants of established overseas games like the Education Departments ‘QuizKids’ which rode on Trivial Pursuit’s shirt-tails.

It is the N.Z unique creations I want to highlight, not the impersonators.

Many of these locally designed retro games rode popular sporting trends, activities and following a somewhat simple set of rules:

Kiwi Sportsmania [Track and Field board game sponsored by Cadburys]

There were also a fair spread of hands on ‘moving bits and pieces’ creations to come from the land of the long-white-cloud.

Everyone recognises Tantrix probably the best known of these ‘brain box’ games which garnished considerable global sales, now has a hardcore following on the internet, even a World Champs! Tantrix was designed by Wellington’s Mike McManaway in 1988 and originally sold under the brand ‘Mind Game’.

Poleconomy, the furtive product of Cantabrian Bruce Hatherley, is a fascinating combination of business and politics. The Australian version, the other country it was sold in was/is Canada, was recommended to children as an insight into how the free enterprise system operates and why not to trust MPs.

Following on the ‘Capitalism 101’ thread there was and still is ‘The Hybrid Real Estate Game’ (Kieran Trass) and a predecessor ‘Take Over’ the N.Z Sharemarket Game’ which crashed and burned along with the market itself in 1987.

The strategy board game with wooden pieces ‘Cathedral’ (1978) was designed by ex RAF pilot Robert Moore – his inspiration being the Christchurch Cathedral which is slightly ironic seeing it is now literally in blocks itself!

Another common thread was tourism.

‘Tour of New Zealand’ ‘Age of Steam’ 'Conservation Game' ‘Destination NZ’ (the later supported by AA) improved the countries geographic knowledge and taught us not to deposit our feed of KFC on the side of roads.

Still, from all these N.Z designed board games there are two that take my eye.

‘Political Football’ encapsulates the divisive Springbok Tour of 1981 and the quintessential Kiwi board game ‘Skulls and Bottles’ which audaciously combines Monopoly and a Drinking game!

In my books the blokes behind ‘Skulls and Bottles’ are the one that deserve public accolades in the form of public honours and not some politician.

As is the norm around here my gallery features photos of the games plus other familiar standards.

If you want more specifics on the workings of these games then Board Game Geek is the place to scuttle off to.